The Irish Language in the Oireachtas 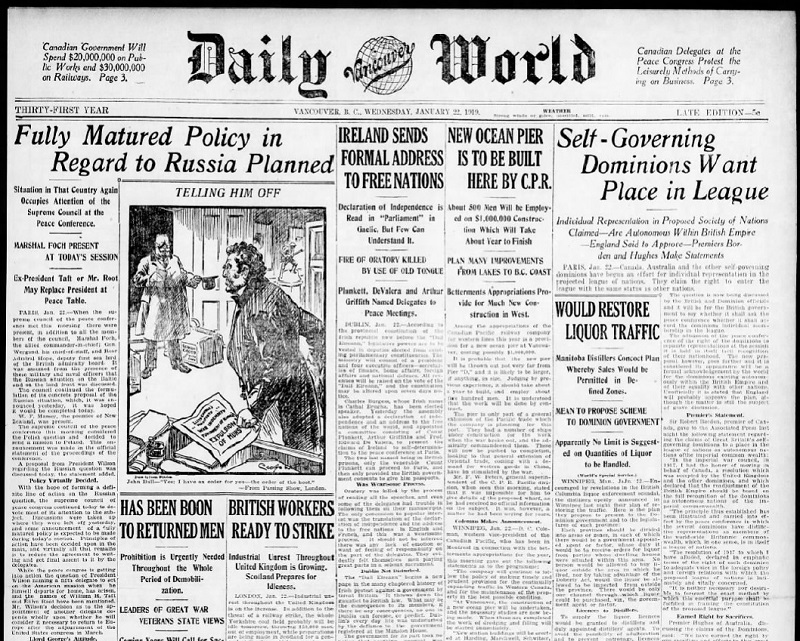 Irish in the First Dáil

The numerous foreign journalists present at the sitting of the First Dáil were somewhat baffled by the fact that the proceedings were carried out through Irish. The front page story in the Vancouver Daily World of British Columbia the following day reported:

“Declaration of Independence is Read in ‘Parliament’ in Gaelic, But Few Can Understand It - Fire of Oratory Killed by Use of Old Tongue”.

The revival of the Irish language, along with all things Irish, had been integral to the rise of the national movement in the latter part of the 19th century. Douglas Hyde and Eoin MacNeill had established Conradh na Gaeilge (the Gaelic League) in 1893 to revive the Irish language and culture and the Conradh ran Irish language classes all around the country. 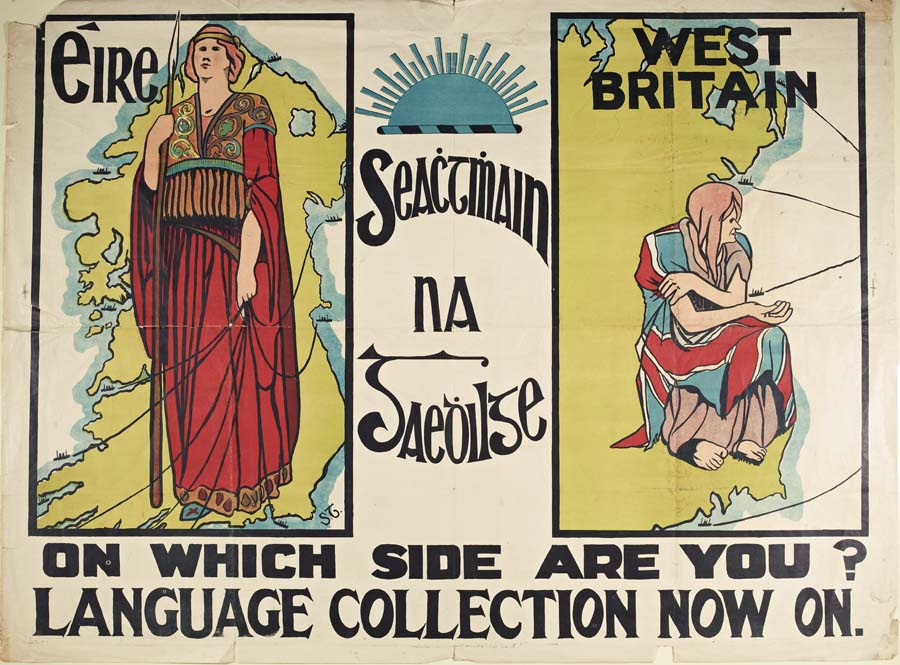 The various Gaelic revival organisations gave their members an opportunity to discuss more than the language. Membership of the Irish Republican Brotherhood (IRB), set up in 1858 with the aim of using force to establish an independent Irish republic, was greatly increased as a result of these organisations. Many members and supporters of the First Dáil were also part of the Irish language movement – for example, the first Leas-Cheann Comhairle, J.J. O’Kelly, was president of Conradh na Gaeilge. The staff of the Dáil translation unit were also active with Michael Collins in the Keating Branch of Conradh na Gaeilge.

The existence of a unique Irish language and culture was evidence of the existence of Ireland as a distinct nation rather than a province of the United Kingdom. This was a crucial point if Ireland was to receive a hearing at the Paris Peace Conference, where the British Prime Minister, David Lloyd George, was vigorously arguing that the Irish question was a domestic matter for the British government. The Message to the Free Nations read at the first sitting of Dáil Éireann stated:

“Nationally, the race, the language, the customs and traditions of Ireland are radically distinct from the English, Ireland is one of the most ancient nations in Europe, and she has preserved her national integrity, vigorous and intact, through seven centuries of foreign oppression” 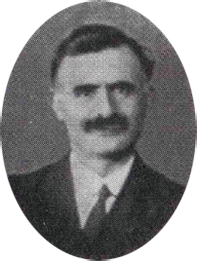 The newly created Teachtaí Dála (TDs) wanted Irish to be the language of the new Irish state. Making it the official language of the new Irish parliament was the first step towards that goal. They also encouraged the use of Irish at the courts of arbitration they later established. Within the first few weeks of its existence, the Dáil established a working committee on education and the Irish language. Before the year was out, it had appointed J.J. O’Kelly Minister for the National Language.

The First Dáil appointed Micheál Ó Loingsigh as translator in 1919 and when the Irish Free State (Saor-Stát Éireann) was set up three years later, an official formal translation service was established. Ó Loingsigh was appointed as a Dáil translator while the Clerk of the Dáil, Colm Ó Murchadha, was charged with providing an official English translation of all laws enacted in Irish and an official Irish translation of all laws enacted in English. Ó Murchadha had helped draft the letter in Irish which Eamon de Valera sent to Lloyd George on 10 August 1921. He had fought in the 1916 Rising and had been imprisoned in Frongach internment camp in Wales. In 1925, responsibility for official translations of Oireachtas legislation was invested in the new post of Chief Translator and Micheál Ó Loingsigh was appointed to the new post. Ó Loingsigh was Chief Translator until his death in March 1942.

Ó Loingsigh was succeeded in the post by another member of the Oireachtas translation unit, Liam Ó Rinn. Ó Rinn was an author and was competent in French, German and Russian and had translated works from those languages. It was he who provided the Irish language version of Amhrán na bhFiann. Unfortunately, Liam Ó Rinn died after a little over a year in the post of Chief Translator and was succeeded by Tomás Page in 1943.

One of the first tasks of the translation unit was to produce the Irish language version of the Constitution of the Irish Free State and the text of the Irish version was approved by a Committee on which both Ó Murchadha and Ó Rinn served with Minister for Education, Eoin MacNeill, the Leas-Cheann Comhairle, Pádraig Ó Máille, and third level academics. In 1937, Liam Ó Rinn and Tomás Page reviewed the Irish language text of Bunreacht na hÉireann (The Constitution of Ireland) before it was put to the people by referendum.

From the establishment of Dáil Éireann, the translation staff decided to use Roman script rather than the traditional Gaelic one. They also worked on developing an official form of the Irish language for use in legislation and other official documents. This included a uniform style of grammatical usage and terminology. In 1931, the Department of Finance issued a directive that the orthographical system developed by Rannóg an Aistriúcháin (the Houses of the Oireachtas Translation Section) be used in all official documents in Irish.

In order to facilitate debates and contributions in the Irish language in Dáil Éireann, a simultaneous translation (interpretation) service was introduced in 1972. Now, the contributions of TDs who chose to speak in Irish could be more easily understood by their colleagues and members of the Press Gallery who didn’t enjoy the same competence in the language. Unfortunately, contributions in Irish were less likely to be covered in the newspapers without the provision of this service. 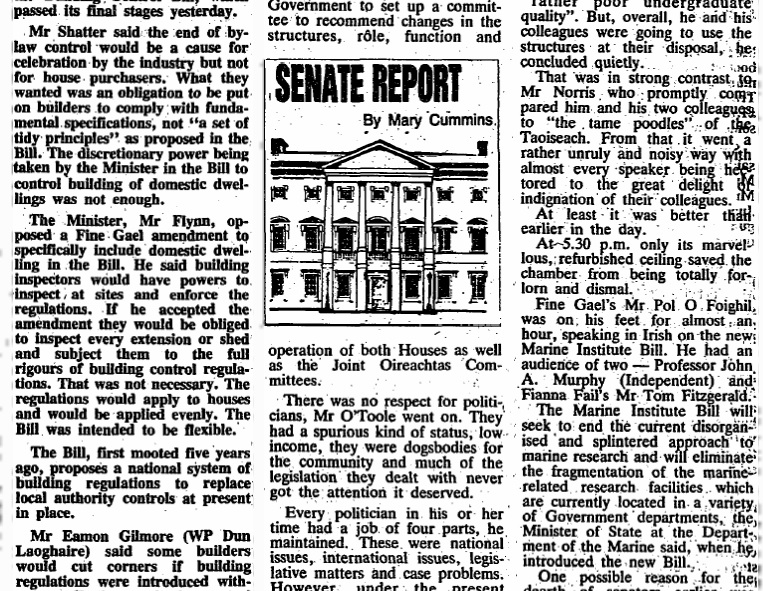 Detail from the Senate Report in The Irish Times, 14 December 1989

It was the issue of media coverage that led to the introduction of the simultaneous translation service in the Seanad in 1990. On 4 December 1989, Senator Pól Ó Foighil made a lengthy contribution in Irish to a debate on a Bill before the House. The contribution was reported with a single sentence in The Irish Times, as follows:

“Fine Gael’s Mr Pol O Foighil was on his feet for almost an hour, speaking in Irish on the new Marine Institute Bill.” 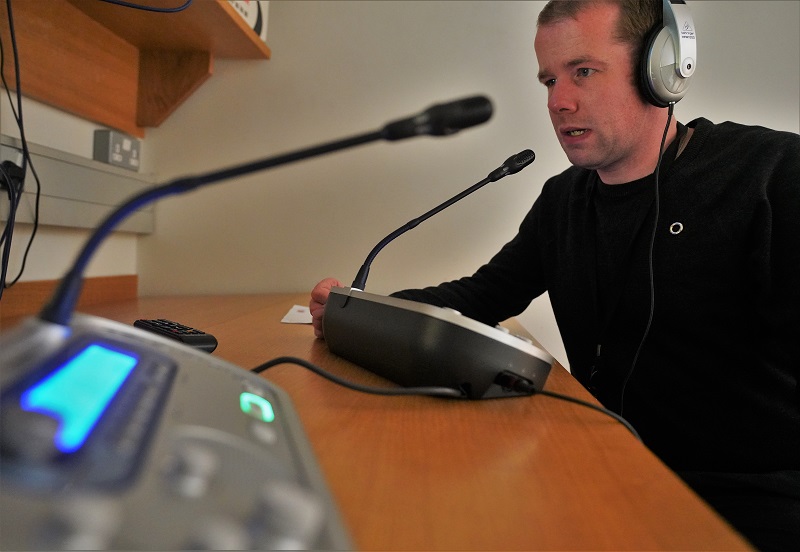 Irish in the Houses of the Oireachtas today

During the 100 years since that first meeting of Dáil Éireann, the fortunes of the Irish language have continued to wax and wane. The Constitution of Ireland (Bunreacht na hÉireann) states that Irish is the first official language and recognises English as the second official language. Irish was recognised as an official working language of the European Union in 2007.

The use of Irish in the Houses of the Oireachtas today is reflective in many ways of the status of the language amongst the general population – some TDs and Senators are fluent in the language and use it frequently, others might introduce their speeches in Irish and there are many with only the “cúpla focal”. Irish language classes are available to Members and staff alike. Joe McHugh, TD for Donegal and present Minister for Education, showed what was possible when he was appointed Minister for the Gaeltacht in 2014. He immediately set himself the task of improving his command of the language and has since become fluent.

Press coverage of the First Dáil

The inaugural sitting of Dáil Éireann on 21 January 1919 marked a moment when scores of newspapers across a disunited kingdom competed to capture what often is called “the first draft of history.”