In 1920, Eamon de Valera made three recordings for the Nation’s Forum, a project initiated by US attorney Guy Golterman.

The Nation’s Forum recorded speeches by prominent Americans including Calvin Coolidge, FD Roosevelt and General Pershing. The records of Eamon de Valera were sold for $2 with royalties of 25c paid to the trustees of Dáil Éireann.

This speech is a memorial address for Terence MacSwiney, TD and Lord Mayor of Cork. MacSwiney was arrested in August 1920 and charged with possession of seditious documents and a police cipher key. He was sentenced to two years’ imprisonment and transferred to Brixton prison in London. He went on hunger strike and died, after 74 days without food, on 25 October 1920. The international attention and sympathy for his suffering made his death a turning point in the struggle for Irish independence. 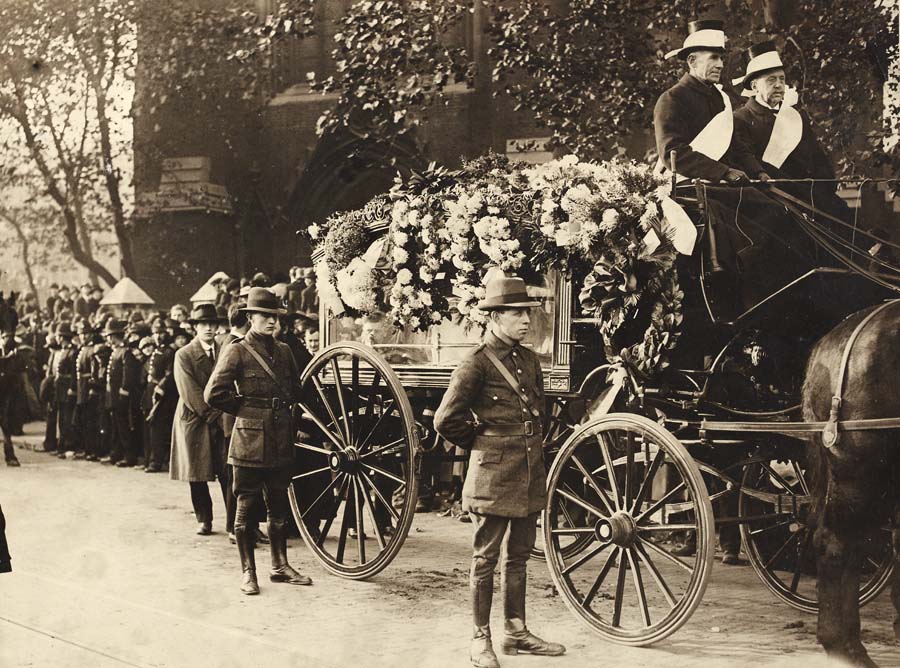 England has killed another son for Ireland to mourn. She has robbed another woman of the joy of her life, and made another orphan sad for the father she must never know. And Lloyd George is proud of his work. Proud that he has given proof that the British Empire is not done for yet - a proof that we do not gainsay, for it is truly a proof that convinces. In every generation for seven centuries Ireland's cry has necessarily been: “It is a hard service they take that help me … Many a child will be born and there will be no father at the christening to give it a name. Many that have red cheeks now will have pale cheeks for my sake.” And our children have never once failed to respond. They offer themselves gladly for the sacrifice. MacSwiney and his comrades gave up their lives for their country.

The English have killed them. Tomorrow a boy, Kevin Barry, they will hang, and, Hale-like, he will only regret that he has but one life to give. Oh God. For they shall be alive forever, they shall be speaking forever, they shall be remembered forever, the people will hear them forever. Ye mothers that are here, think that each one of these too had a mother who loved him as you love your sons. Ye wives that are here, think that MacSwiney too had a wife, and her love was no less than yours. Ye children that are here, think that he too had a child, and his love was as kind as your father's. And they are dead that men should be at peace, and war should be no more, and that a small nation that covets nothing from its neighbour should enjoy the right of its own freedom.
But Ireland dries her tears over the graves of her martyred ones. They have fought their fight and they shall reap the victory. Lloyd George has killed them, but their bodies only has he reached; their spirits he could not. He has tried them by the test; they have not been found wanting.

Fitzgerald's and MacSwiney's and Murphy's bodies are indeed in the clay, but it is the sacred bosom of the motherland they loved so well and served so nobly, and their god-like spirits are with us now to inspire, and to be at our side always with a legioned strength to help us. If God wills that the freedom of our country should thus come in our own rather than in the blood of our enemies, we too shall not hesitate at the price, or shrink at the sacrifice. Nor will those who come after us value less the heritage we shall thus have purchased for them. The glorious standards our comrades have set must be ours and in this last phase of Ireland's struggle, to which it has been their privilege to lead the van, our motto must be theirs - the motto of victory, liberty or death.