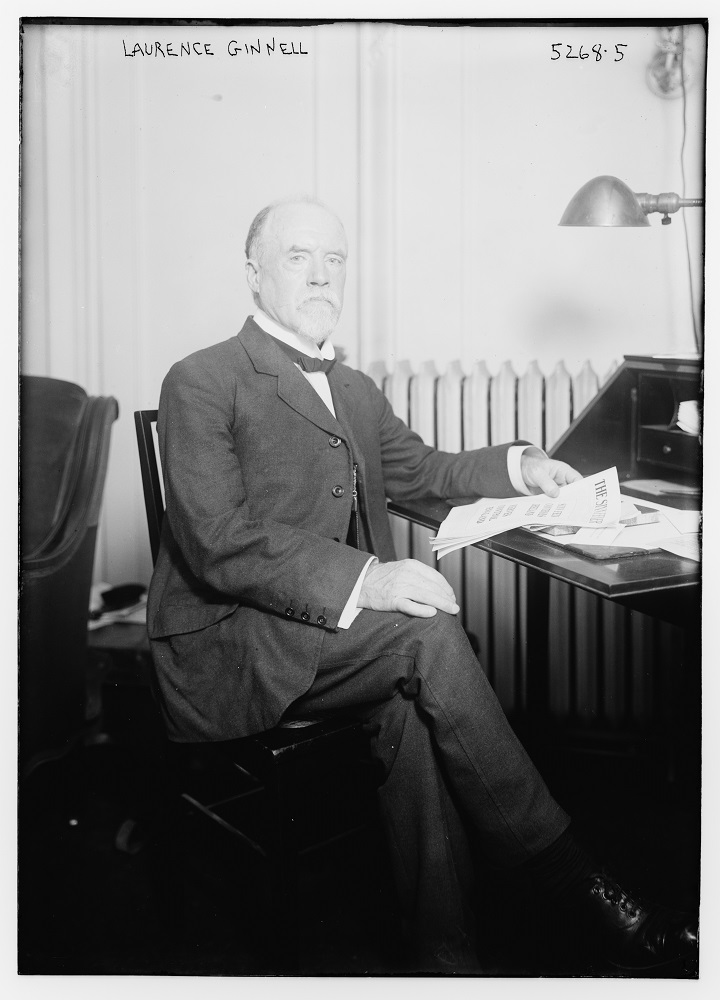 The institutional vehicle for this work was the Department of Propaganda, re-named the Ministry of Publicity during the cease-fire of 1921. The agency made a significant contribution to the survival of republicanism during the dark months of 1920-21, both by bolstering the morale of those working for that cause and by undermining the self-confidence of its opponents. This it did by dint of the labours and talent of the small staff who undertook most of its work, and in the face of severe obstacles placed in its way by British counter-measures. Key to the success were the Ministers at the apex of the machine, and the assistants through which they worked. 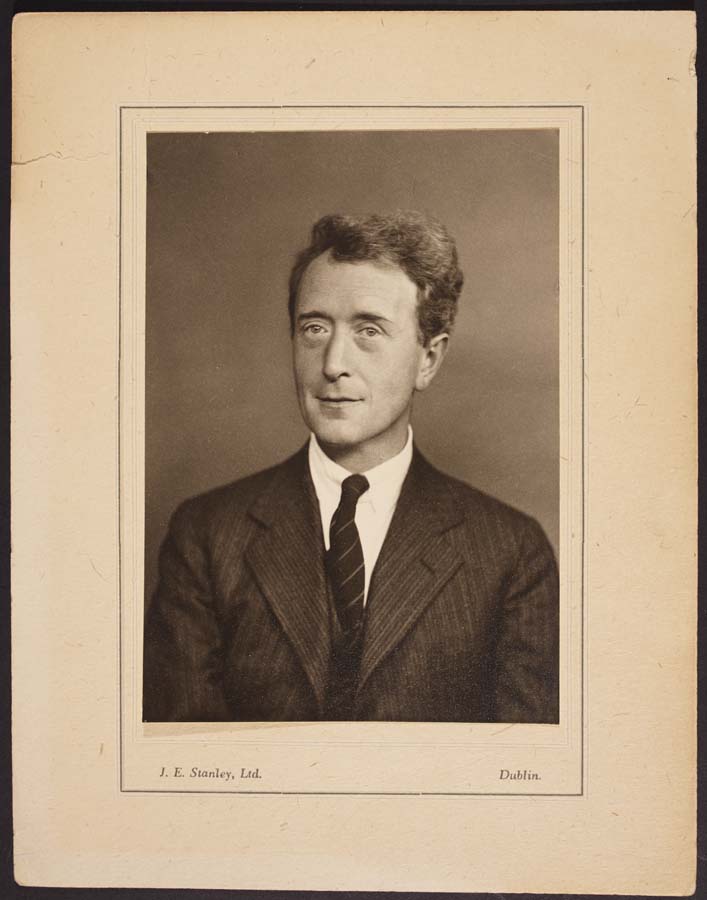 Desmond FitzGerald / Courtesy of the National Library of Ireland

The first head of the Department of Propaganda was Laurence Ginnell. Ginnell was a maverick former “advanced” home rule MP, albeit one who found uncongenial the atmosphere of the Irish party under the leadership of John Redmond. Advanced in years and suffering from ill-health, he was arrested and imprisoned in April 1919 after only a few weeks in his post. After his release four months later he spent most of the rest of the period working for the cause overseas.

Ginnell’s replacement, Desmond FitzGerald, a prominent multilingual member of the London Irish literary scene, lasted longer. He held the post from May 1919 until his own arrest in February 1921, and it was during his term that the Department registered some of its greatest successes.

Eschewing Ginnell’s focus on the publication of information pamphlets, FitzGerald concentrated his efforts on the daily press. He built upon the foundations laid a year before when Sinn Féin had established a Press Bureau under Robert Brennan, subsequently a key figure in the Dáil operation. The Press Bureau had circulated a syndicated column to dozens of provincial newspapers in Ireland. FitzGerald’s ambitions were wider, and his sights were set on the Irish, British and overseas national press. 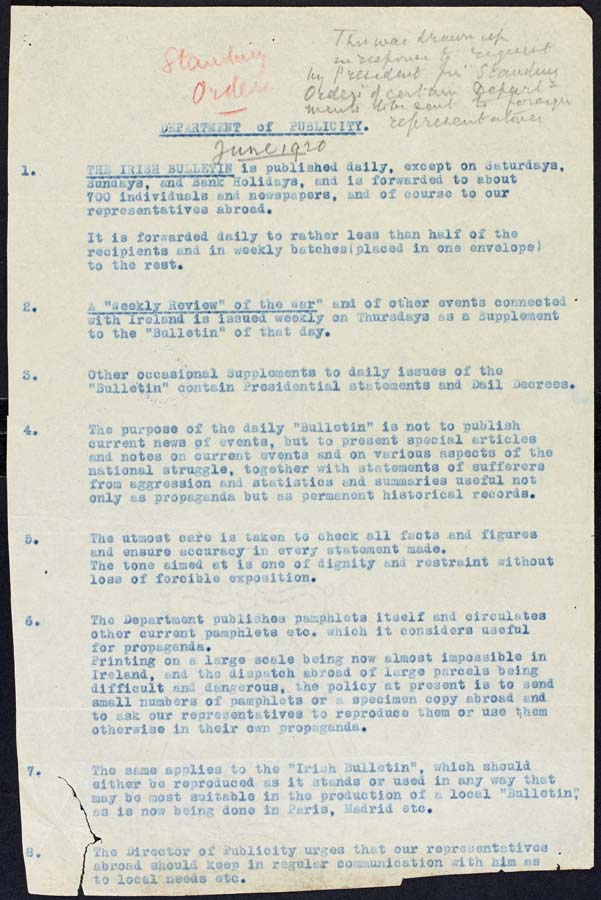 The result was the Irish Bulletin, a mimeographed publication that appeared almost every weekday from November 1919 until July 1921. It was an impressive achievement, especially considering it had to move office 14 times in two years to elude British detection, and that FitzGerald was arrested in February 1921. The tone of the Bulletin was frankly republican, and an edition might contain articles extolling republican military and political successes or condemning British excesses. While it was an overtly partisan publication, FitzGerald, and his successor Erskine Childers, were scrupulous about avoiding fabricated stories on the basis that they would undermine the credibility of the verifiably true reports.

Within a short space of time, the Irish Bulletin succeeded in challenging the monopoly in the dissemination of news about Ireland hitherto enjoyed by the British government. Expanding its print run from 30 to over 2,000, the information in the Bulletin became standard reading for foreign journalists operating in Ireland. More importantly, Bulletin information found its way into their reports. It also enjoyed a wide circulation within Britain, especially amongst MPs at Westminster who were sympathetic to the republican cause, notably among the British Labour party.

Much of the credit for this penetration of the inner sanctums of British power in its London citadel should go to Art O’Brien. Art O’Brien filled a number of roles within the republican enterprise in England, including publicity and fund-raising. O’Brien was second generation Irish, as were FitzGerald and Piaras Béaslaí, another member of the republican publicity machine.

O’Brien had thoroughly immersed himself in the Gaelic revival movement in London. While he was not himself a journalist, the contacts he facilitated for those involved in the publicity effort back in Dublin were crucial in effecting a change in domestic public opinion about British Government policy towards Ireland. A measure of his success in this respect was the raid by Scotland Yard on the premises of the O’Brien-led Irish Self-Determination League, in November 1920, and the deportation back to Ireland of a number of republican advocates at that point resident in England. 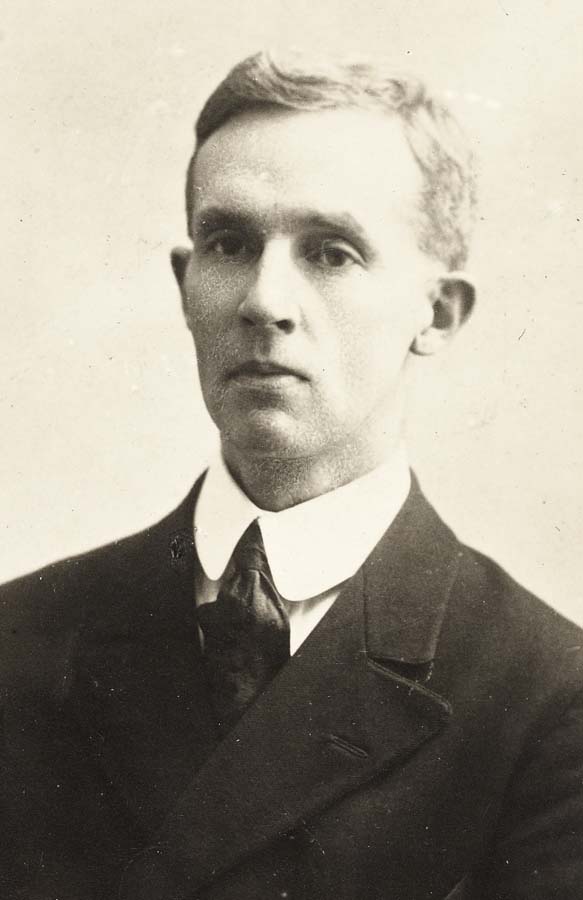 Erskine Childers / Courtesy of the National Library of Ireland

FitzGerald’s successor was one of the most enigmatic figures of the independence struggle, Erskine Childers. Childers had fought with the British in the Boer War and had written a history of his unit’s involvement in the campaign. He had also served at various times in British army, navy and air force intelligence services. There were many separatists, most notably Arthur Griffith, who distrusted his bona fides. Michael Collins, however, championed his appointment to head the Department, notwithstanding the fact that, at this time, Childers was not a TD. It proved an inspired decision. Having previously been an imperialist, then a Home Rule advocate, Childers was ideally positioned to provide solid arguments that could be used to rebut the charges levelled against the republican cause from her enemies, foreign and domestic. He was also a superb writer.

One of his principal concerns was the success the British had in certain quarters in depicting the republican campaign as the work of a “murder gang”, unrepresentative of Irish public opinion but capable of suppressing opposition by dint of sheer menace. Desmond FitzGerald had sought to challenge this interpretation in the Irish Bulletin throughout 1920 via a focus on the constructive peaceful work done by Dáil Éireann, notably by its network of arbitration courts. Many of these undertakings had been rendered impossible by the repressive British policies implemented in the second half of the year. 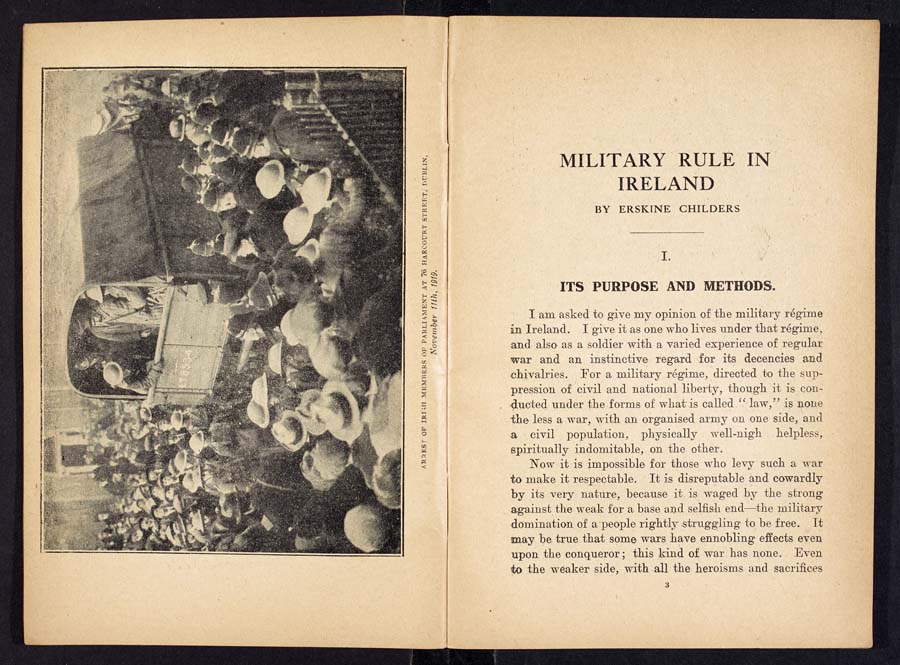 Perhaps influenced by his South African experience, Childers’s strategy to combat such a viewpoint was to depict the IRA as the official army of the Irish republic. While all its members had sworn the Oath of Allegiance to the Dáil that had been introduced in late 1919, he felt the Dáil itself needed to make a public statement, defining the official, if subordinate, status of the IRA and accepting responsibility for its actions. De Valera was already conscious from his time in America of the damage done to the republican cause by the “murder gang” thesis, and was readily persuaded by Childers of the need for this explicit statement, which became official policy in March 1921.

The only major setback experienced by the Department of Propaganda occurred in the final months of the War of Independence, when its offices were raided and its equipment seized by British forces. This could have been a crippling blow to its ongoing work, as it offered the British abundant opportunities to issue authentic-looking forgeries of the Irish Bulletin and other documents and publications. So inept were the few attempts to this end by Dublin Castle, however, that they merely succeeded in making the real thing all the more credible, thereby further demoralising the Crown forces.

The status of the Department of Propaganda was elevated in September 1921 when it officially became the Ministry of Publicity.

In between de Valera’s escape from Lincoln gaol in February 1919 and his election as President of the Dáil in April, his mind had moved in the direction of a journey to the United States. In early June de Valera travelled from Liverpool to New York, incognito and in great discomfort, aboard the liner SS Lapland.

This speech is a memorial address for Terence MacSwiney, TD and Lord Mayor of Cork. The international attention and sympathy for MacSwiney's suffering made his death a turning point in the struggle for Irish independence.

Department of Propaganda
"The publicity given to the case of Ireland owing to the treatment of the Lord Mayor of Cork was the largest yet attained. It was so great that foreign journalists thought that the Irish Government spent millions of money on propaganda in other countries."