The following is an extract from a statement to the Bureau of Military History by Daithí O’Donoghue. A member of Sinn Féin, O’Donoghue was dismissed from his civil service job in 1918 after refusing to take the newly introduced oath of allegiance. He went on to work for the fledgling Dáil Éireann. In this extract he describes the raid on the Dáil Éireann headquarters on Armistice Day 1919. 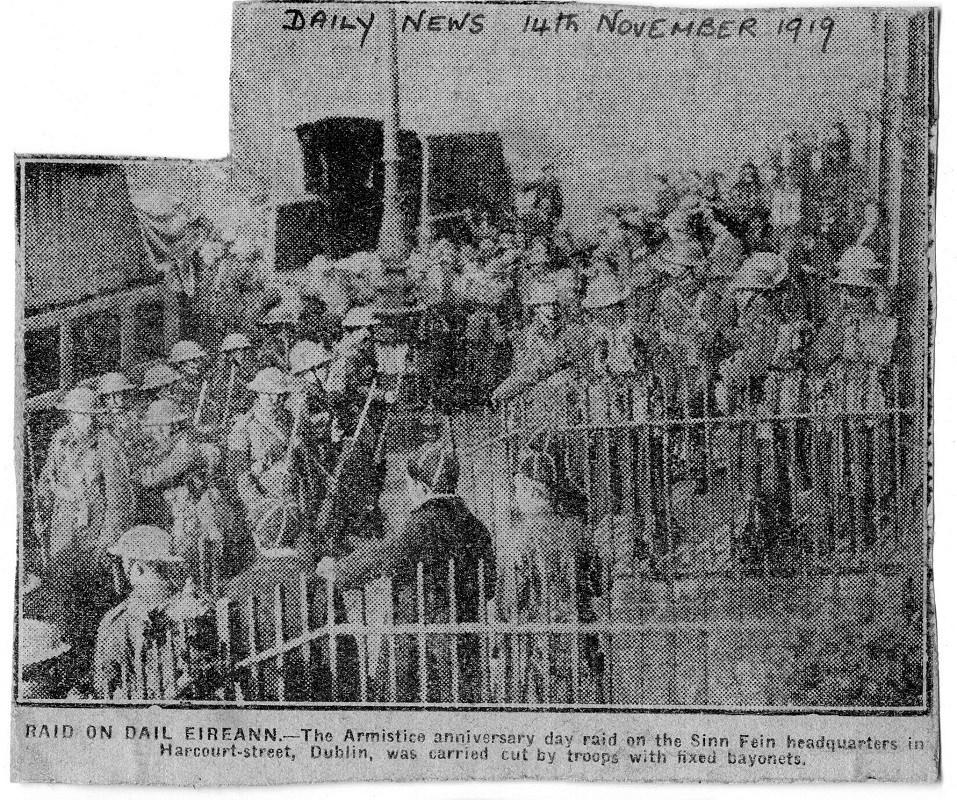 On the 11th November, 1919, as I was leaving 76, Harcourt Street, to go to the Sinn Féin Bank, I observed that there was a raid on the Sinn Féin Headquarters at No. 6. I returned immediately with the news, and a warning that it might be advisable to be prepared in case No. 76 were raided. Mícheál Ó Coileáin was on the premises and I sent up word to him. After stowing away some money and accounts in the secret cache, I went into the street and mingled with the crowd outside No.6. When the raid was over I followed the lorries down St. Stephen's Green, South, until they were out of sight. Whilst the crowd was dispersing I went into University Church arid stayed there a few minutes. Then, deciding to avoid No. 6, I was going back to 76 when I met Brian Ua hUigiun and Fionán Ó Loinsigh at the corner of the Green on their way to meet some other T.Ds. We were just about to enter 76 when some military lorries came speeding towards us and pulled up there, so we passed on, saved by a matter of seconds. Leaving my two friends near Hatch Street, I came back on the other side of the street and joined the crowd which had gathered to look on at the raid.

After some time a few of the staff appeared at the first floor windows, amongst them Paddy Sheehan who held up a large sheet of white paper on which he had printed, probably with a pen handle, "All Hands Arrested". The words were clear enough to be read by the people below. Then I noticed some soldiers on the roof, and hoped sincerely that Micheál Ó Coileáin had escaped by the trap door. As the prisoners were about to be brought out and put on board the lorries, I was standing on the offside edge of the crowd with my hands behind my back, when I felt someone tapping my hands and pressing a slip of paper between my fingers. Glancing casually over my shoulder, I saw Joe O'Reilly slipping away on his bicycle. I moved right away through Montague Street into Corrigan's back yard where I opened the paper and read ‑ "Follow them up, send in food, smokes, mattresses and blankets, M.C.". 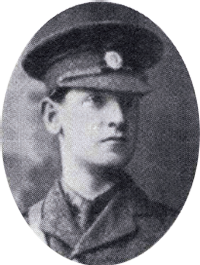 Needless to say, I uttered a fervent buideachas le Dia, knowing from the old familiar handwriting that Mick was safe. I learned afterwards that he had crawled along the roofs from 76 until he reached a skylight of the Standard Hotel. Having managed to open this (by breaking, or otherwise, I cannot remember now), he dropped to the landing, which was somewhat risky having regard to the "well" of the stairs. Some of the staff (probably including "the boots") were friends of ours so that Micheál had no difficulty in making a contact, and was safely away in a few minutes. Joe O'Reilly was never very far from Micheál at any time, and, in this case, was waiting for him. Hence he was able to get in touch with me before the lengthy raid was over. 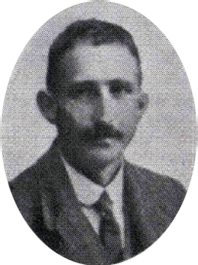 The prisoners taken were John O'Mahony, T.D., Frank Lawless, T.D., Seán Hayes, T.D., Dick McKee, Q.C. Dublin Brigade, and the following members of the staff: Diarmuid Ó hÉigeartaigh, Mícheál Ó Loingsigh, Paddy Sheehan, Dan J. O'Donovan and Fintan Murphy. When they were about to move off I hired a car from the hazard in Clonmel Street and, seeing them apparently headed for the city, I told my jarvey to drive down the Green and Grafton Street. After the lorries, passed I had not much difficulty in keeping them in sight, and eventually located them at the Bridewell. I arranged with the Four Courts Hotel to supply nine teas right away and nine breakfasts for the morning. I still have the receipt for these.

I then went across to the Clarence Hotel and I asked them to send in nine mattresses and the necessary bed-clothing. The meals were allowed in to the prisoners but not the bedding. Having purchased a supply of pipe tobacco, cigarettes and matches, I determined to seek admission to the prisoners. After some wheedling with the D.M.P. man at the gate, he called the Sergeant-in-charge, who was good enough to pass me as far as the guardroom, where he took charge of the parcels and promised to distribute them among the prisoners, but said that on no account would I be permitted to see any of them. I am glad to record that he kept his promise faithfully. Unfortunately for the prisoners, it turned out to be a very cold night. Paddy Sheehan told me afterwards that he almost cried from the bitter cold in his cell. None of the girls in the office was taken away.

When I reached home I found that Mrs. Ó Donnchadha was absent and the young folk in bed. On coming in later she was astonished to find me there. It appears that someone had called to the house and told her that all the people in 76 had been taken in a raid and brought to the Bridewell. She forthwith set out for the jail, taking an overcoat and rug and some toilet requisites for me. On arrival there she handed the articles over to the D.M.P. man on guard with a request that they be given to Mr. Ó Donnchadha. He very kindly agreed to do so and they found their way to Dan O'Donovan whose name probably sounded most like mine to the policeman. Needless to say Dan was surprised and was very glad to get them. Long afterwards, when the prisoners (who had been sentenced to three months imprisonment for unlawful assembly or some such charge) were released and I got my property back, I found the lining of the overcoat had been ripped open, presumably in a search for a hidden message or anything contraband.

On the day after the raid I went to Harcourt Street and as soon as I thought it safe to do so I went down the area steps of No.76 and was admitted at once by Seán McCluskey, the caretaker. He had fortunately escaped arrest. He told me that a "G" man, Inspector McFeely, who went down to search the kitchen premises, etc., had whispered to him to stay below out of sight. The first thing I did was to go up to the first floor back where Fintan Murphy and I worked. In this room there was a very large wardrobe with handsome mahogany inlaid doors, built into the wall. The commodious inside had been very effectively camouflaged by Mr. Batt O'Connor, and to my joy I found that the secret recesses had not been discovered. The Account Books were safe, having been put away by Fintan Murphy, and the gold and bank notes, which I had stowed away temporarily, were just as I had hidden them. I found there also a very important book, the discovery of which by the enemy would have been a very serious matter. It was Brigadier Dick McKee's large pocket notebook which contained enough evidence of incidents, such as the Collinstown raid, etc., to hang him, if it had been found.

In going through the various rooms I noticed that the firegrates contained masses of burnt papers no doubt important stuff which the staff had the presence of mind and sufficient time to destroy before the raiding party was admitted. I was particularly anxious about the loose-leaf Dáil Loan Registers on which Dan O'Donovan was working. There was no trace of them, and I feared they had been captured. However, eventually, I found them all safe and sound under a long counter that Batt O'Connor had erected for us. The bottom shelf was only a couple of inches above the floor, and in poking with a stick, I felt the papers. Dan J. O'Donovan had not failed. McCluskey and I soon had all the stuff parcelled up and as by that time night had fallen, we carted everything off "to an unknown destination".

McCluskey told me that Collins had actually come back to 76 on the night of the 11th after the raiders had gone, and stayed to complete some work on which he had been engaged.