In 1920, Eamon de Valera made three recordings for the Nation’s Forum, a project initiated by US attorney Guy Golterman.

The Nation’s Forum recorded speeches by prominent Americans including Calvin Coolidge, FD Roosevelt and General Pershing. The records of Eamon de Valera were sold for $2 with royalties of 25c paid to the trustees of Dáil Éireann.

This speech is a call to Americans to take up Ireland’s cause and recognise it as “the cause of right, and of justice, and of true democracy everywhere”. 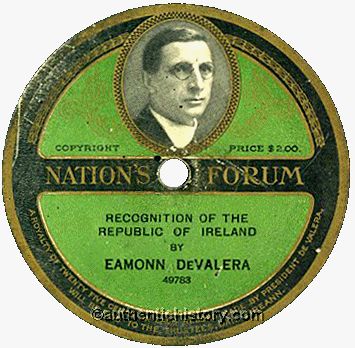 No, the Irish do not hate England. The Irish desire peace with England and with the rest of the world. It is not the Irish who are disturbing the world peace. It is not they who are the aggressors. It is the British. The British can end this question in an hour by withdrawing their troops. The Irish, on their side, can end it only by sacrificing their nationhood and their national right to self-determination and freedom. Which ought to yield?

Ireland would have to give up what is hers, her own, her very life. England would only have to give up that, the possession of which is not vital to her, and to which, in any case, her title is but a robber's title. Ireland cannot will her own annihilation.

It has cost her 750 years of blood and tears to hold onto her individual national existence and she will not relinquish it now. The Irish Republic exists. Its shackles serve but to make its reality the more concrete. It is not destroyed when individuals or nations plunge their heads into the sand and say they cannot see it. It is there, recognized or not, and it can be destroyed only by the power that brought it into being - the will of the Irish people.

It is fortunate that the question of the recognition of the Republic arises at this time. It is doubly fortunate that America is strong enough to decide upon it boldly, without fear, in the way its conscience prompts. Ireland's cause is not Ireland's cause only. It is the cause of the world. It is the cause of right, and of justice, and of true democracy everywhere. If I were an American, I would make it the supreme object of my life to win for my country the distinction of securing now for mankind, in peace, what millions have died for vainly in war. Ireland's claims furnishes America the opportunity.

This question of recognition is distinctly an American question, a question solely of American policy. The decision is yours and yours only - yours to say whether you shall continue, as in the past, to recognise a government of might in Ireland, or begin now to recognize a government of right. The decision on Ireland was put on record forever, America's own answer to the questions of her President.

Shall the military power of any nation or group of nations be suffered to determine the fortunes of peoples over whom they have no right to rule except the right of force? Shall strong nations be free to wrong weak nations and make them subject to their purposes and interests? Shall people be ruled and dominated by arbitrary and irresponsible force, or by their own will and choice? Shall there be a common standard of right and privilege for all peoples and nations, or shall the strong do as they will and the weak suffer without redress?

The Paris Peace Treaty, the international diplomats and the international financiers, have not answered these questions as the American people intended them to be answered. It is now a question for the American people to answer them for themselves in their own spirit and in their own regard. Their answer will live in history as the epoch of a new era or as the knell of the hope of all who believe that mankind had at last learned its lesson.

The Irish Language in the Oireachtas