It marked a radical departure from the insurrectionary tradition, which sought to achieve such independence by military means. It was also a departure from the original policy of Sinn Féin. Using the precedent supplied by Hungarian separation from Austrian domination, this original policy had prioritised domestic political action and the progressive building-up of the structures of statehood from within. By these means Sinn Féin had intended to separate from Britain but not to completely repudiate the Crown.

The change in approach was a direct response to the realisation that the military failure of the 1916 Rising precluded any repetition in the near future. In addition, the continuation of the First World War had opened up new possibilities not just for Ireland but for the many other nationalities in central and eastern Europe who were seeking freedom from control by imperial powers.

Particular interest was given to, and inspiration drawn from, the Polish case. During the war, the major belligerents, the Allied and Central Powers, had declared their support for the creation – more accurately, recreation – of an independent Polish state at the end of the conflict. There were significant differences on many points, not least regarding the borders of the proposed state, its internal form of government and its relationship to neighbouring countries. First Germany and Austria-Hungary (November 1916), then the USA (January 1917), Russia (March 1917), and finally the UK and France (June 1918), had pledged their support for the principle of Polish independence. As events transpired, this independence did indeed come to the country, although perhaps more as a result of the political and military collapse of the three partitioning powers, Germany, Russia and Austria-Hungary, than through any diplomatic machinations.

Such niceties were not readily apparent – or perhaps considered relevant – from the other side of the European continent. Irish separatists saw an overwhelmingly Roman Catholic country that that had for generations been dominated by foreign powers become an independent republic at the end of the war. They perceived this to be the result of an international consensus that the principle of self-determination should be applied in its case. And they believed they could emulate both the Polish method and its success.

However, Britain won the war, and was therefore not in the same situation as the Polish partitioning Powers, who had all been on the losing side. Whether the Irish separatists fully appreciated this and the other specifics of the Polish case is doubtful. “Britain’s difficulty is Ireland’s opportunity” was a mantra that had applied while the fighting was ongoing. However, following the German collapse and the Armistice, it should have been apparent that windows both of difficulty and opportunity were rapidly closing.

The new strategy, while attractive, had potential pitfalls. Not the least of these was that it might imply to some a repudiation of both the insurrectionary and incremental separatist traditions. Both traditions, especially the former, had their passionate advocates. For this reason it was necessary to reaffirm the on-going commitment of the Dáil to these older paths to freedom. This was done through the other statements of policy made at the inaugural public sitting on 21 January 1919, the Declaration of Independence and the Democratic Programme. 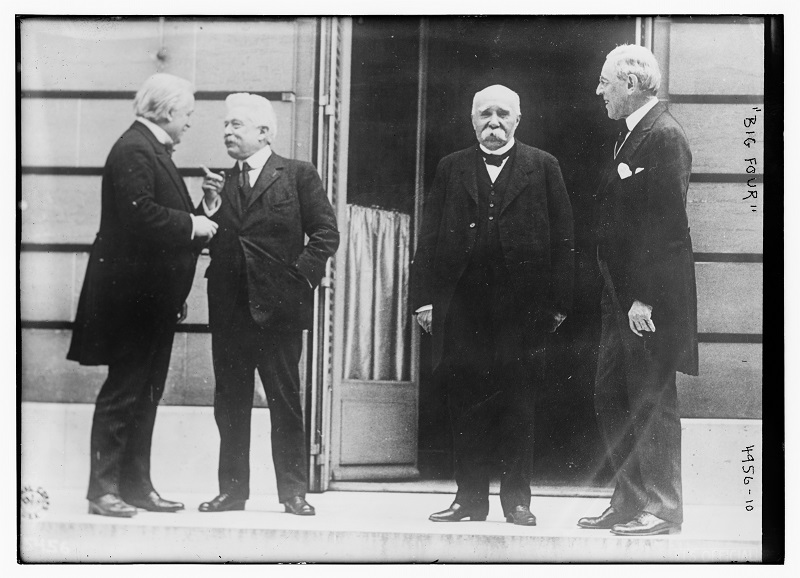 "To the Nations of the World! Greeting."

The text sanctioned by the Dáil outlined the case put forward by republicans for the application to Ireland of the principle of self-determination. Woodrow Wilson, President of the United States of America, had passionately articulated this principle during the war. Such was his prestige, and so great was the appreciation for the American contribution to the Allied victory, that many honestly believed a new era of morality in international relations had dawned. In Ireland and elsewhere people believed Wilson would be able, if necessary, to force the other victorious powers, France and Britain, to abide by these noble precepts, most notably “government by consent of the governed”. 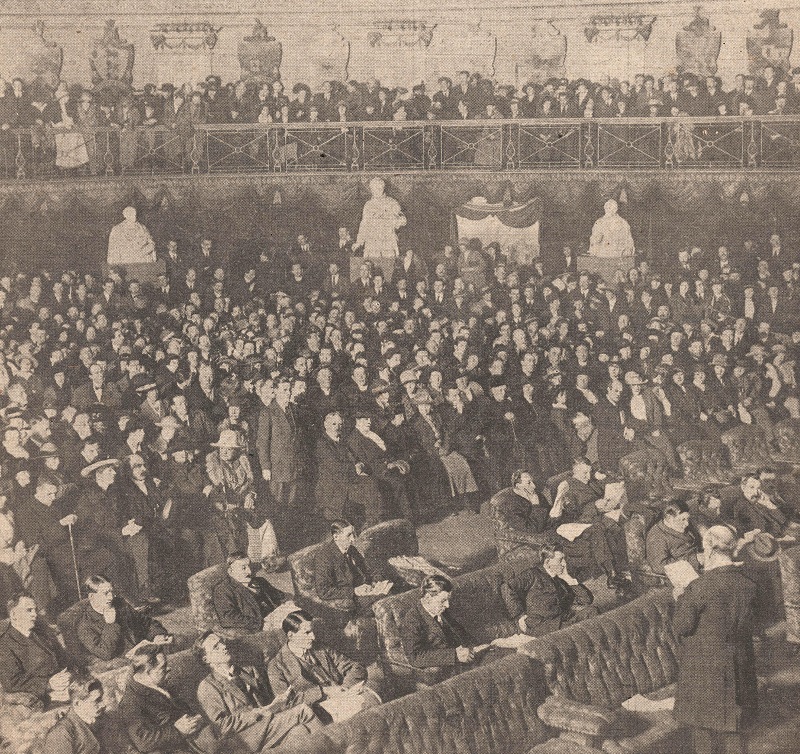 Count George Noble Plunkett addressing the first public sitting of the Dáil; Plunkett read the Message to the Free Nations of the World in French / Alamy Stock Photo

At the core of the claim for the application of the principle of national self-determination to Ireland was the conviction that Ireland was, indeed, a nation, that “the race, the language, the customs and traditions of Ireland are radically distinct from the English”. Further, and invoking the provisions of the Proclamation of the Easter Rising, it was stated that the Irish people had never relinquished their national rights, “and throughout the long era of English usurpation she has in every generation defiantly proclaimed her inalienable right of nationhood down to her last glorious resort to arms in 1916”.

While the document was for the most part couched in similarly high-minded rhetoric, there was a subtle appeal to the self-interest of those nations which, up to now, could only look with envy at the dominant global position enjoyed by British commerce. The reference to Ireland being “the gateway of the Atlantic” was calculated to attract the interest of established states whose patterns of trade had been unduly influenced by British policy over the decades. Back us, the document seemed to suggest, and the British will be unable to dictate to you how, what and with whom you should trade. The reference to “the new world emerging from the War” was likewise an appeal to the nations such as Poland, Finland, the Baltic states and others, whose independence had already been promised. It implied that these emerging states could best serve their own self-interest by clipping the wings of the imperialism that had long suppressed them. 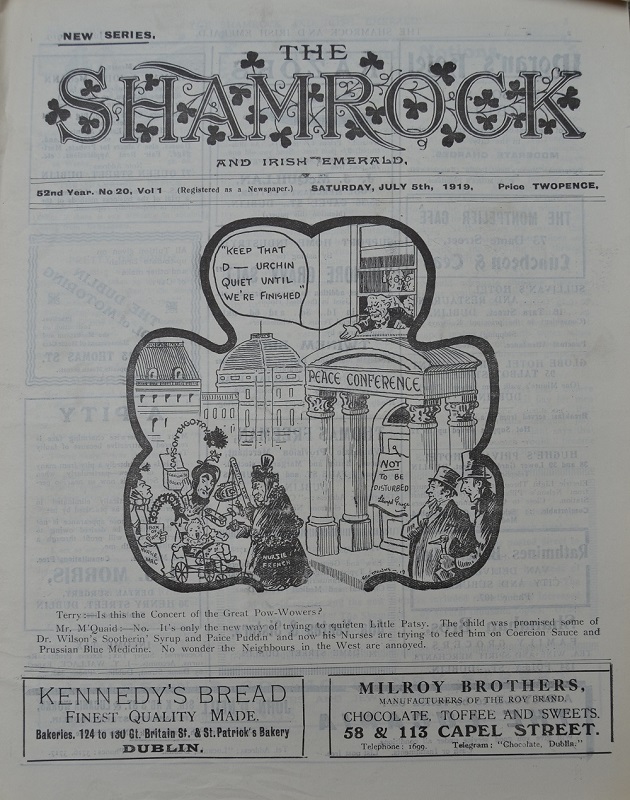 The Dáil’s initial plan to focus on the enormous gathering of diplomats in Versailles for the Peace Conference in the early months of 1919 failed. This was primarily because, for all of Wilson’s good intentions, realpolitik had not given way to morality in the conduct of international affairs. No-one, including the American President, was willing to sacrifice their interests by pushing the Irish case for a hearing in the teeth of determined British opposition. The result was disillusionment and no little anger at Wilson, tempered by a determination to pursue other possible routes to the same destination.

The first was an audacious scheme to intervene in the American presidential election in late 1920. The objective was to obtain a commitment from one, and hopefully both, of the major parties to unilaterally recognise Irish independence in the event of their candidate being elected. It was a plan fraught with difficulties, especially in a country like the United States of America, where a repudiation of the troubles associated with the “Old World” remained a fundamental tenet of foreign policy, notwithstanding the involvement in the war.

It failed for a variety of reasons. One problem was the division within the Irish-American community that should have been driving the campaign. A number of ill-judged actions by President de Valera during his extended stay in the country served to alienate substantial portions of that Irish-American community and the American establishment more generally.

In the absence of support for Irish freedom from existing or new internationally-recognised states, the only alternative was to seek out those regimes who were themselves struggling for acceptance on the world stage. Perhaps the most surprising was the contact established by Irish republicans with the representatives of the nascent Marxist, atheistic Soviet Union. The Russians were desperate for the type of hard cash possessed by the Irish on foot of their successful fund-raising campaigns. They toyed with the idea of offering mutual diplomatic recognition in exchange for funds. But even this avenue was closed when the Russians realised the high price that the British would inflict on them for interfering in what London regarded as a domestic question.

The only available option, therefore, was to go back to the beginning, and explore the possibilities offered by the intelligent use of older methods. Warfare was now channelled into guerrilla tactics rather than conventional methods. The organic development of the state was best illustrated by the success of the Dáil courts. Whether these would succeed in paving a path to freedom, notwithstanding previous failures, no-one could guarantee. What is certain with the benefit of hindsight is that the “Irish Question” at this time did leave an imprint on the world stage.

Disgusted at Wilson for his refusal to champion Irish freedom, Irish-Americans within the Democratic party, in alliance with Wilson’s other enemies within the party and the Republicans, successfully blocked the ratification by Congress of the Versailles treaty. This opened the way to a new era of isolationism in American foreign policy that took 20 years and another World War to bring to an end. Long, indeed, was the shadow cast by this Message to the Free Nations.

Read the Message to the Free Nations of the World, as reported on 21 January 1919

Watch the Message to the Free Nations of the World, read by former Members of Dáil Éireann

Ireland and the Versailles Peace Conference

The attempt by Ireland to gain recognition of its independence by way of an appeal to the Versailles Peace Conference is one of the many neglected aspects of the ‘revolutionary decade’ of 1912-23.