Ireland and the Versailles Peace Conference

The attempt by Ireland to gain recognition of its independence by way of an appeal to the Versailles Peace Conference is one of the many neglected aspects of the ‘revolutionary decade’ of 1912-23.

There are two easily-identifiable reasons for this state of affairs. The first is simply that the appeal did not succeed, and that Ireland was denied such a hearing – and as failures tend to be forgotten, so the endeavour was consigned to the margins of the record of these years. That this happened very quickly was due to the second reason – the guerrilla war conducted by the IRA against Crown forces during the War of Independence, and the brutal British response to same. It is, however, vital to remember that as far as the republicans were concerned, this violent path to self-government was not the preferred one; rather was it, at best, an unplanned response to the failure at Versailles. It is, therefore, important that the background to, and reasons for, this failure be examined. 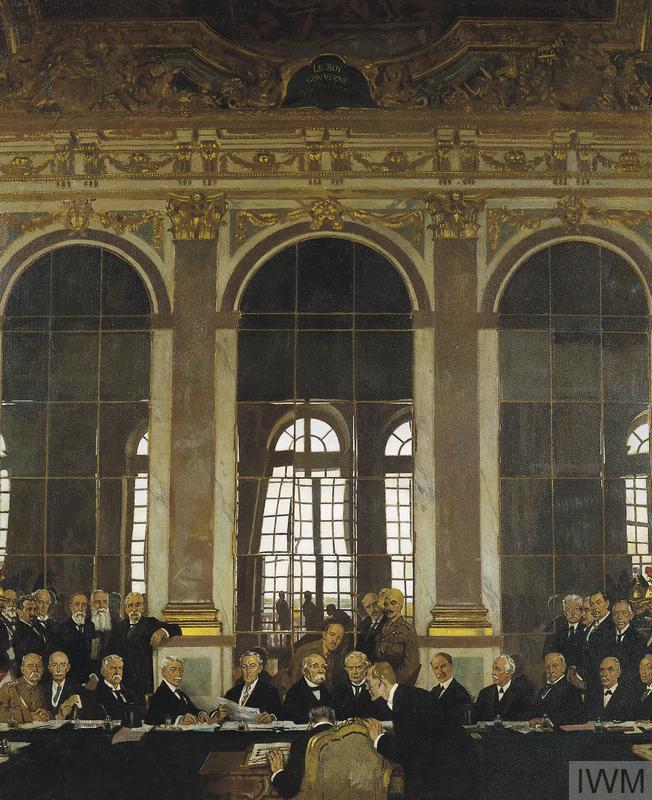 The end of the war

The origins of the Peace Conference lay in the appalling scale of the casualties experienced by all sides during the first two years of the war. Allied to this was the fact that on the Western Front this slaughter had produced no meaningful movement in the front lines that had been established in the autumn of 1914. On the other hand, on the Eastern Front there had been significant developments. The failures of both the Russian and Austro-Hungarian states to properly organise for war had led both to a series of humiliating defeats. Germany had advanced inexorably through the Polish lands annexed by Russia a century and more before. The Gallipoli campaign had been an expensive failure. Up until the middle of 1918 it seemed that the Central Powers were winning the war.

There were, therefore, reasons both to seek a negotiated settlement, and to avoid one. The forces opposing a ceasefire overcame those who supported such a move and the killing continued. The result was revolution in Russia, mutinies in the French army, a rise in political and social tensions in Britain, America’s entry into the war and the collapse of the German, Austro-Hungarian and Turkish empires. The conference that eventually convened in Versailles in January 1919 therefore met in radically different circumstances than seemed likely less than a year before – German capitulation as opposed to an all-round ceasefire. 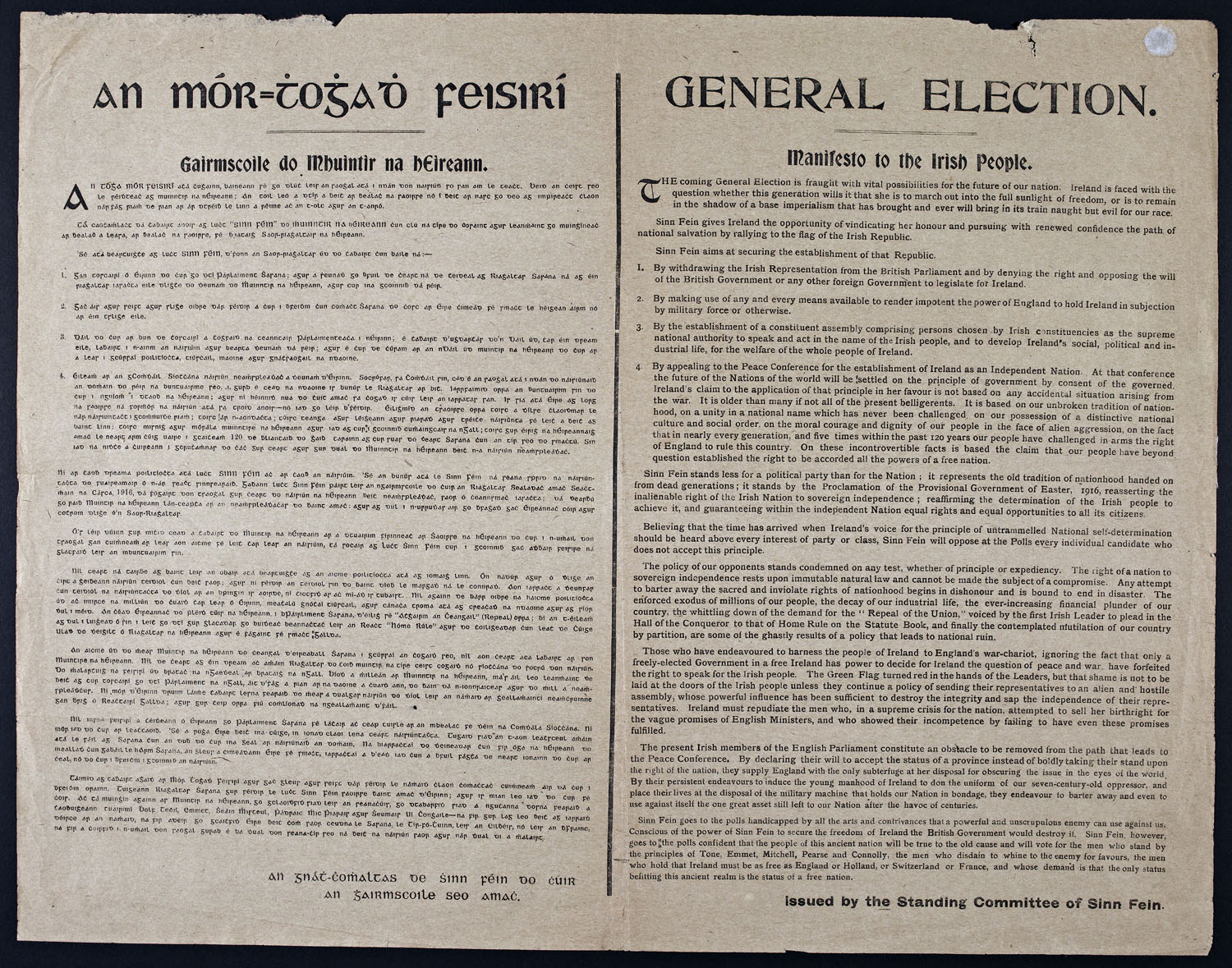 Impact of the armistice on Ireland

From an Irish republican perspective, this altered state of facts on the ground had both positive and negative features. Had a negotiated ceasefire been agreed, say, at the end of 1916, these forces would not have been in the strong position they enjoyed in the country two years later. The imperial states conducting both sides of the war would have had a mutual interest in retaining control over their subject peoples.

Had a ceasefire been agreed during 1917 or 1918, the situation would have been better for Irish republicans. During that period republicanism became stronger and better organised as a result of its opposition to the war. Moreover both sets of belligerents became engaged in a series of diplomatic manoeuvres, holding out the prospect of freedom to nations subject to domination by the opposing side as a means of undermining their enemy’s war effort.

When the actual armistice – in effect German surrender – came in November 1918, the situation had changed once more. Sinn Féin now was the dominant force in Irish politics, as witnessed by its victory in the 1918 general election. However the fact that there had been a clear outcome to the war, and that Britain was on the winning side, meant the scope for Irish republicans to seek a diplomatic route to independence had diminished almost to nothing. 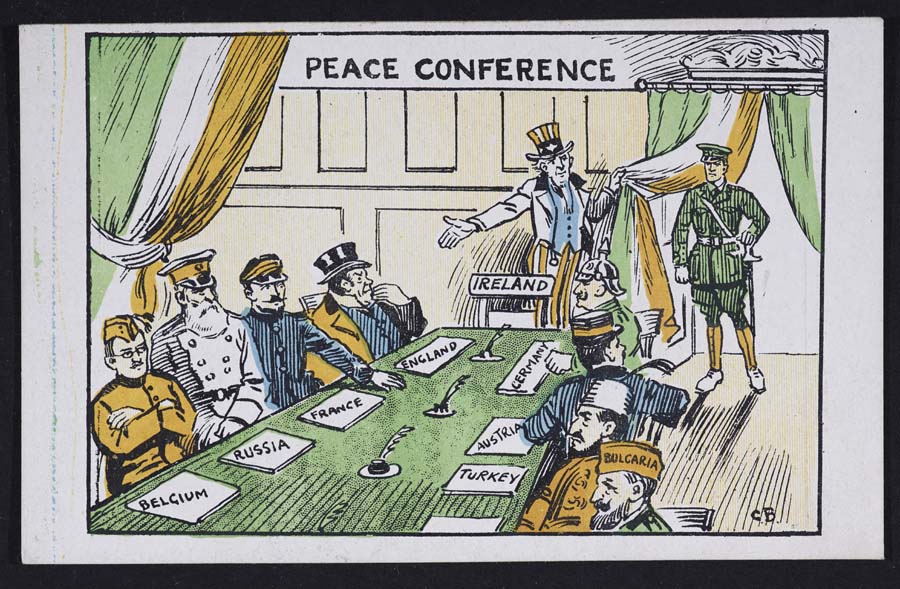 The policy of seeking an appeal to the post-war peace conference had been a central plank in the republican strategy since the election of Count Plunkett in the crucial Roscommon by-election in February 1917. Over the course of the following 18 months, along with a commitment to abstain from attending the Westminster Parliament, it became the cornerstone of the separatists’ campaign. During the Sinn Féin Ard Fheis of October 1917, it found expression in the amendment of the party’s constitution that dropped the old dual monarchy commitment in favour of full-blooded republicanism. The new clause read (emphasis added):

“Sinn Féin aims at securing the International recognition of Ireland as an independent Irish Republic. Having achieved that status the Irish people may by referendum freely choose their own form of Government.”

The relevant section of the party’s election manifesto in 1918 likewise committed the party to an appeal “to the Peace Conference for the establishment of Ireland as an Independent Nation.”

It was, thus, no coincidence that one of the three texts that formed the central part of the proceedings on the occasion of the inaugural meeting of Dáil Éireann on 21 January 1919 was the Message to the Free Nations of the World. This was a powerful assertion of Ireland’s claim to independence, and of her commitment to the new world order of justice and rights, championed by President Woodrow Wilson of the United States. Over the following weeks and months much energy was expended by the new Dáil administration in seeking to translate this rhetorical claim into practice by means of lobbying the enormous delegations of politicians and press that had assembled in Paris for the negotiations at Versailles. While some gains were registered in terms of gaining sympathy for the republican position, it proved impossible to add the Irish Question onto an already packed agenda, simply because the British, as one of the Big Four which ran the event, refused point-blank to even consider the request, and none of the other delegations were minded to challenge this refusal.

Thus the peaceful, diplomatic path to Irish independence – the internationalisation of the Irish Question - was blocked. In the fetid atmosphere of disappointment and disillusionment that ensued, it is no great surprise that it did not take long for the military alternative to manifest itself.

When the Parliament of Ireland was abolished, the lack of a parliament in Ireland became the focus of Irish politics for more than a century.

"No, the Irish do not hate England. The Irish desire peace with England and with the rest of the world."