The political and military dimensions of the struggle for Irish independence had distinct points of origin.

Prior to 21 January 1919 they had developed along different paths, sometimes converging, at others diverging. It was inevitable, therefore, that the relationship after that date would continue to evolve. As both the War of Independence and the underground state sponsored by the Dáil progressed, both were subject to ongoing and increasingly harsh British countermeasures. While the distinction was at times vague, it is useful to distinguish both between matters of the loyalty and control of the republican military forces, and between theory and practice in both areas. 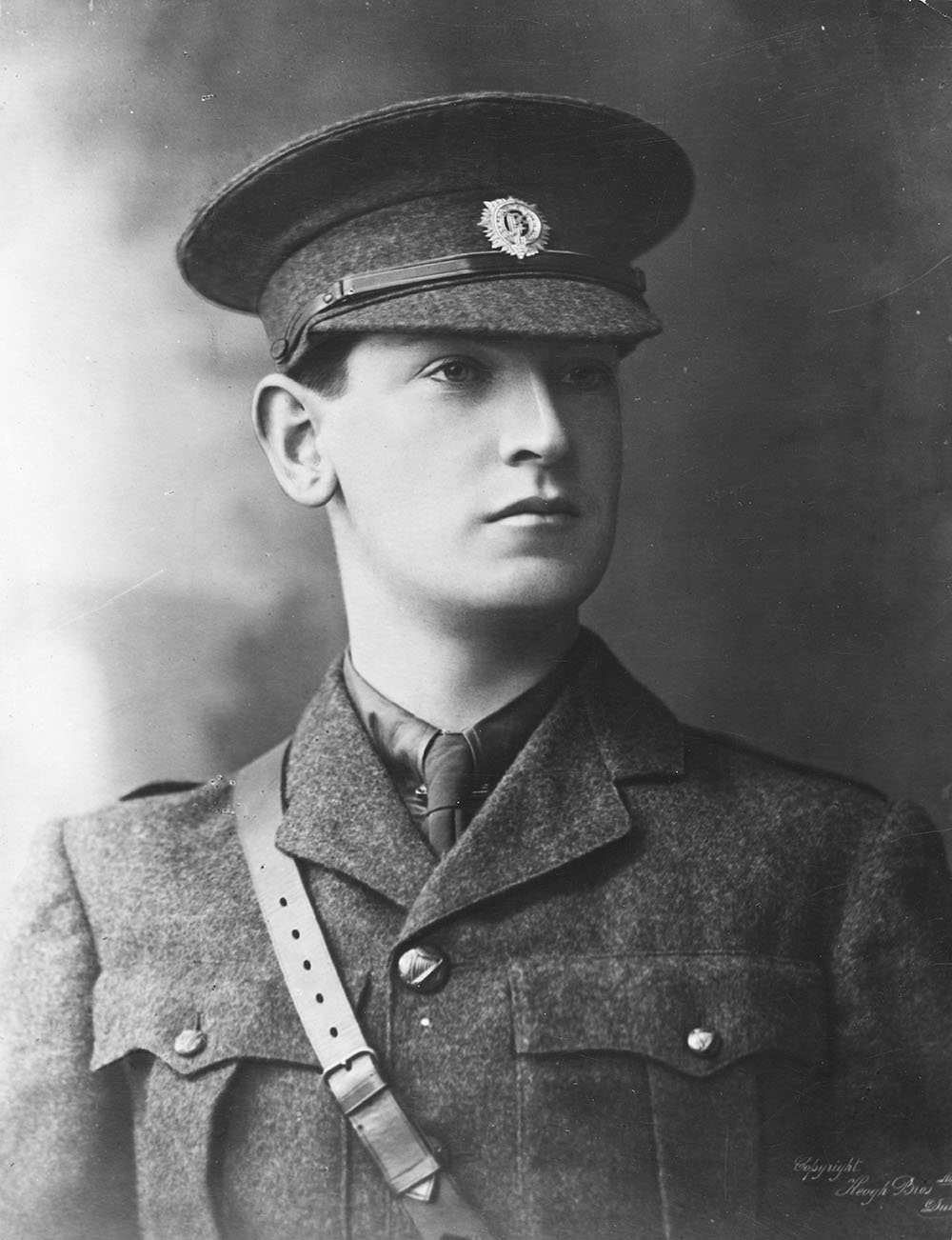 Michael Collins / Courtesy of the National Library of Ireland

From a political perspective there were several bodies that laid claim to the military forces of the Republic. Chronologically speaking, the first into the field was the Irish Republican Brotherhood (IRB). The IRB had helped to plan the Fenian uprisings of the 1860s, and the Military Council of its Supreme Council was the body responsible for organising the 1916 Easter Rising. The 1873 constitution of the IRB illustrates some of the nuances of the issue. It defined the task of the organisation as being “to prepare Ireland for the task of recovering her independence by force of arms”, but it also stated that in times of peace it would restrict itself to “the exercise of moral influence” in the same direction. Members of the organisation were obliged to swear an oath of allegiance to its Supreme Council, which also described itself as “the Government of Ireland”. Members also pledged themselves to obey the IRB constitution and their “superior officers”.

Clearly, the concept of a hard and fast distinction between the military and political spheres had yet to emerge. This distinction would have been difficult to establish in any event given the relatively small size of the talent pool available to the separatist movement. Until the establishment of Dáil Éireann, the Supreme Council of the IRB regarded itself as the de jure government of the country, and as such entitled to the loyalty of whatever military forces it possessed. Even after January 1919 the IRB remained in being, and continued to play a significant behind-the-scenes role in both political and military spheres, not least because during this period Michael Collins was its President. Collins, more than anyone else, was the personification of the overlap between the two spheres. 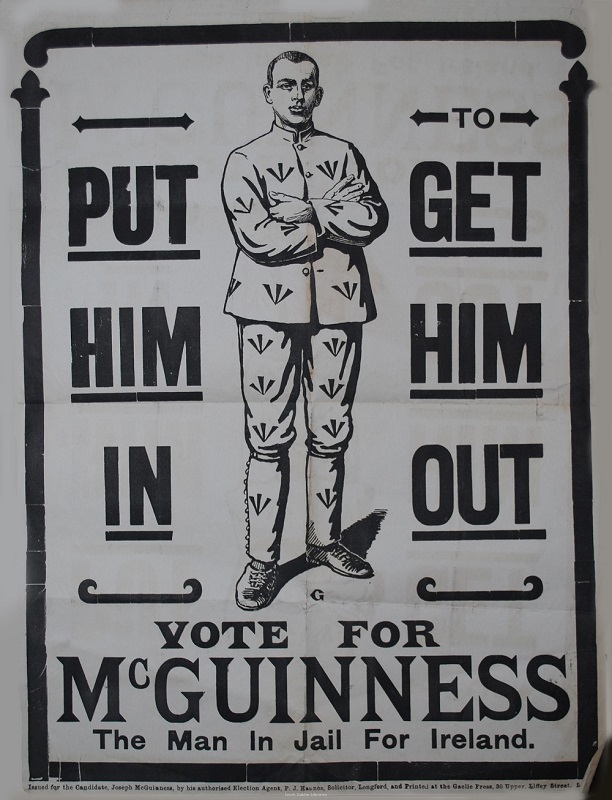 By-election poster for Joseph McGuinness, who was imprisoned in Lewes Gaol after the Rising / South Dublin Libraries; Capuchin Archive

Sinn Féin, as an open political organisation, albeit with a pronounced cultural separatist penumbra, was mistakenly identified by British authorities as being involved in planning the Easter Rising. This stood the body in good stead in its by-election campaigns in 1917. Many of those who won seats in these by-elections, including Joseph McGuinness and Eamon de Valera, were veterans of the Rising.

At the Sinn Féin ard fheis in late 1917, the party ditched its traditional dual monarchy platform and adopted a republican constitution. This new constitution prioritised political action, with the ultimate goal of international recognition. Yet at the same time many of those elected to office within the party, notably de Valera as president of Sinn Féin, either already did, or were to, hold senior positions within the Irish Volunteers, who held their convention the day after the conclusion of the Sinn Féin ard fheis. 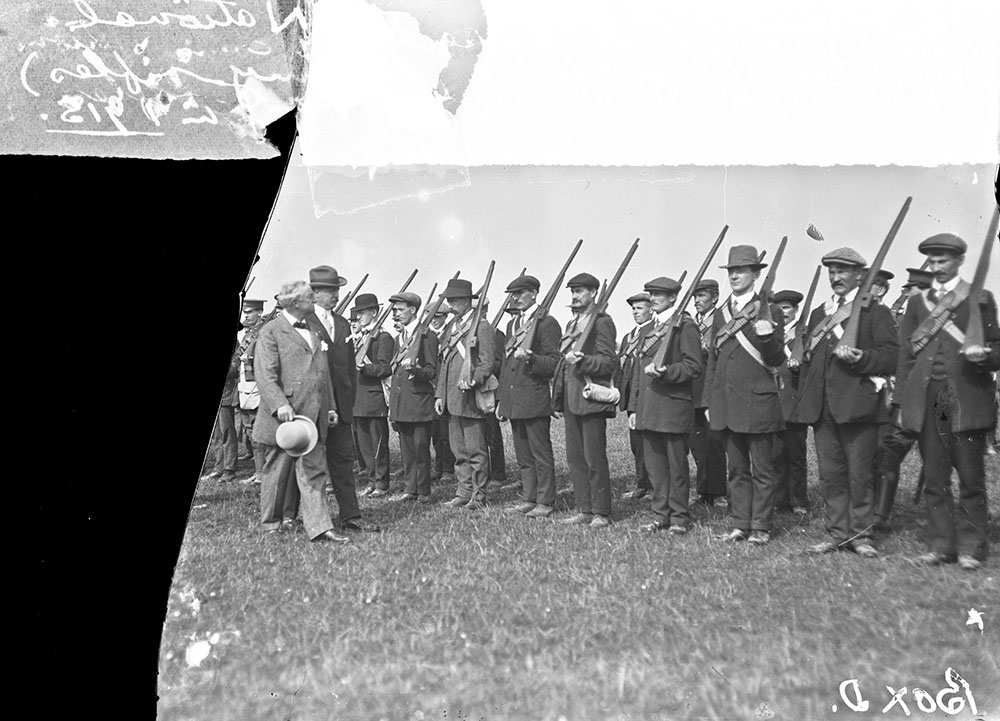 The Irish Volunteer movement had travelled a different road. Created in the heightened atmosphere of the home rule crisis of late 1913, its founding manifesto posited the creation of the force as a response to “the display of military force and the menace of armed action” by the unionist bloc. Its purpose was defined as the securing and maintenance of “the rights and liberties common to all the people of Ireland”, with the posture of the force explicitly “defensive and protective”. The constitution of the Volunteers, as endorsed by its governing Provisional Committee in October 1914, expanded upon these matters. Overall power resided in an annual General Convention, with a smaller General Council, and a still smaller Central Executive, charged with day-to-day administration. No explicit political policy goal was outlined. The Convention of 1917 did not make significant changes to the organisation’s structure, but the election of so many figures holding office in Sinn Féin to positions of authority within the Volunteers undoubtedly had the effect of moving its ethos in a more explicitly republican direction.

The democratic, egalitarian ethos of the Volunteers was that of a popular militia. As such it shared certain features with the much smaller left-wing militia, the Irish Citizen Army (ICA), which had been founded during the 1913 Lockout. As with the Volunteers, the ICA nominally had a defensive purpose, but following the workers’ defeat in the Lockout, and the outbreak of the war in August 1914, James Connolly, the ICA’s commander, began to agitate for an uprising. To this end he forged an alliance with the active wing of the IRB and sections of the Volunteer leadership. This alliance culminated in the 1916 Rising. While the Rising in theory obliterated the distinction between the two forces, in practice the ICA survived as a distinct entity, albeit one that played a marginal role during the War of Independence when compared to the Volunteers.

Establishment of the Dáil

The establishment of the Dáil clearly created a new situation, almost a year zero, in terms of the relations between the political and military organisations seeking independence. A new parliament was in place that, as far as its progenitors were concerned, embodied the expressed will of the people for independence. There was a logic to placing what had been heretofore a self-governing, private militia onto a more satisfactory formal footing, as this force could then be presented to the world as being the army of the Republic-in-being, under the control of its government, the Dáil ministry.

There were, however, disadvantages to such a change in policy. Any apparent misdeeds by this Irish Republican Army (IRA) could be presented as simple criminality. Its actions could be characterised not as the work of an army but that of a “murder gang”, a term increasingly used by the British authorities as a stick with which the beat the separatist movement more generally.

On the other hand, many within the Volunteers were reluctant to accept civilian control. There was a precedent for such concern. In the summer of 1914, the Volunteer executive had been almost swamped by nominees of John Redmond, the leader of the home rule party. When war broke out in the autumn of that year, Redmond called on the Volunteers to enlist in the British army. His nominees departed the Irish Volunteers and the movement was split. Given such a backdrop, the suggestion that the Volunteers should now take orders not from its own executive but from the politicians elected to the Dáil inevitably raised certain hackles. Some objected to such political control on principle. Others felt it could compromise the organisation’s military autonomy and efficiency, and potentially undermine its republican ethos. 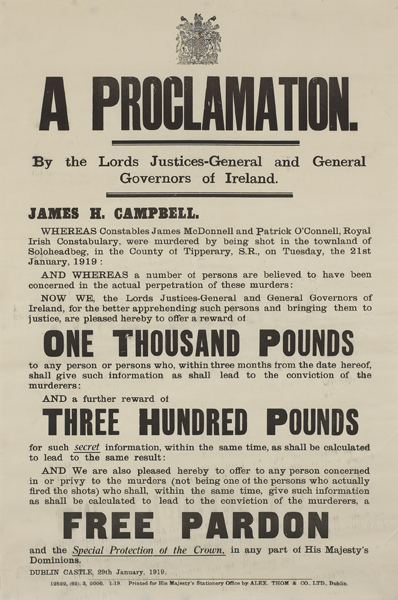 Proclamation offering a reward for information on those involved in the Soloheadbeg ambush / Dublin Castle RIC [Public domain], via Wikimedia Commons

These conflicting concerns were foregrounded by the fatal attack by Volunteers on a Royal Irish Constabulary party at Soloheadbeg, County Tipperary, which occurred on the same day as the first meeting of the Dáil. The attacks were not even sanctioned by the Volunteers’ own chain of command, let alone by any putative Dáil Minister of Defence, a role which only came into existence the following day at a private meeting of the Dáil, when Richard Mulcahy was elected Minister of Defence pro tem.

The killings gave rise to general condemnation in the locality, and this may have played a part in the virtual silence of the Ministry in statements to the Dáil on the matter of military operations over the subsequent months. In the short term this silence provided the Dáil with a defence of plausible deniability for particularly controversial actions, but this did not stop the British Government from seeking to discredit the political claim to a Republic by associating it with such actions. Nor did it satisfy those Volunteers who sincerely believed their actions were legitimated by the pursuit of that claim, and sought the validation they believed Dáil sanction alone could provide. 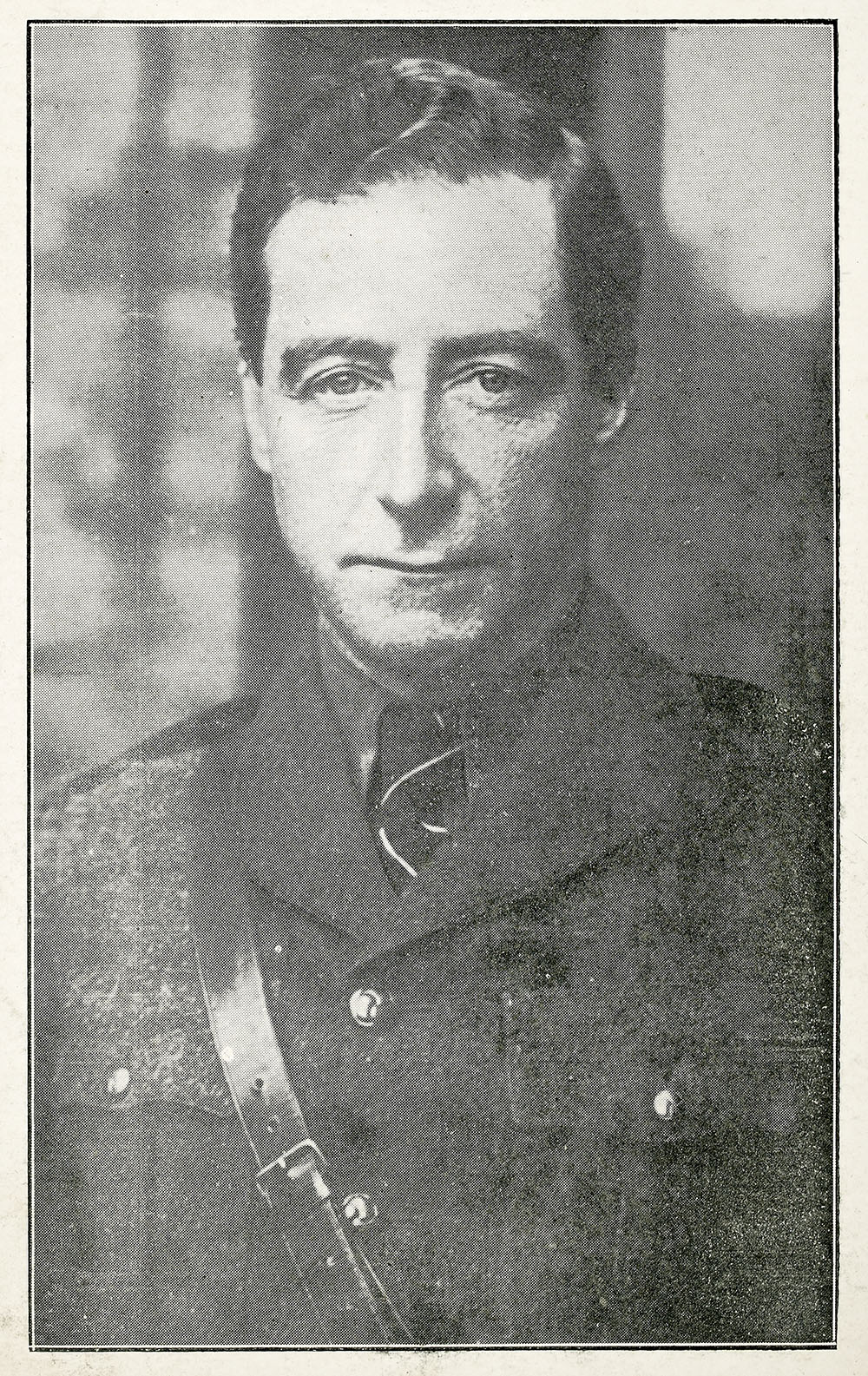 Cathal Brugha / Courtesy of the National Library of Ireland

On 10 April, de Valera, having succeeded Cathal Brugha as President of the Dáil Ministry, made a formal statement of policy that referred to the Minister of Defence as being “in close association with the voluntary military forces which are the foundation of the National Army”. The word “foundation” could be interpreted as implying that the Volunteers did not at that date constitute the army of the state. In August, Cathal Brugha, now the Minister of Defence, as well as a prominent member of the Volunteers, sought to clarify this ambiguity by means of an oath of allegiance. This oath would be taken not only by all Volunteers, but also by TDs and those employed by the Dáil. While this action resolved one aspect of the problem, it further muddied the waters in terms of the line of demarcation between political and military authority.

It seems that some within the upper echelons of the IRB were initially reluctant to swear the oath, fearing that it undermined the Brotherhood’s claim to be the sole source of republican legitimacy. By degrees, however, it seems to have been near universally administered to the relevant parties, including both existing Volunteers and new recruits, over the following months. On the one hand such a step regularised the position of the Volunteers by subordinating the army to its political masters, most of whom, of course, had themselves served in the Volunteers, or continued to do so. It also, however, created the potential for a conflict between the two sides, if the Dáil could be seen as having abandoned - even temporarily - the republican position as expressed in the oath. This scenario became all too real following the signing of the Anglo-Irish Treaty of 6 December 1921 and its ratification by the Dáil the following month.

This speech is a call to Americans to take up Ireland’s cause and recognise it as “the cause of right, and of justice, and of true democracy everywhere”.

Nationalists of all stripes had long cherished the idea of establishing a “native” system of justice.