Fundamentally, the Debates Office has been doing the same job since its establishment in 1922.

Reporters have always reported the proceedings of the Oireachtas in five or ten-minute segments called “takes”, editors have always read over and checked the completed takes and the edited takes have always been collated and published in the Official Report very shortly after the debate takes place. The way the Debates Office team goes about doing it, however, has changed completely over the years.

For a very long time, the Official Report was produced using simple tools such as pencils, pens and jotters, manual typewriters and carbon paper, scissors and glue. This was possible because, for 70 years, reporters recorded debates by taking a shorthand note of proceedings. Shorthand, a skill which is increasingly rare nowadays, is a symbolic writing method that allows people to write at high speeds and with much greater brevity than they would if using longhand. This highly valuable skill, which has existed in some form for more than 2,000 years, allowed competent practitioners to write at speeds of 170 words per minute or more, which is fast enough to record most people’s speech. 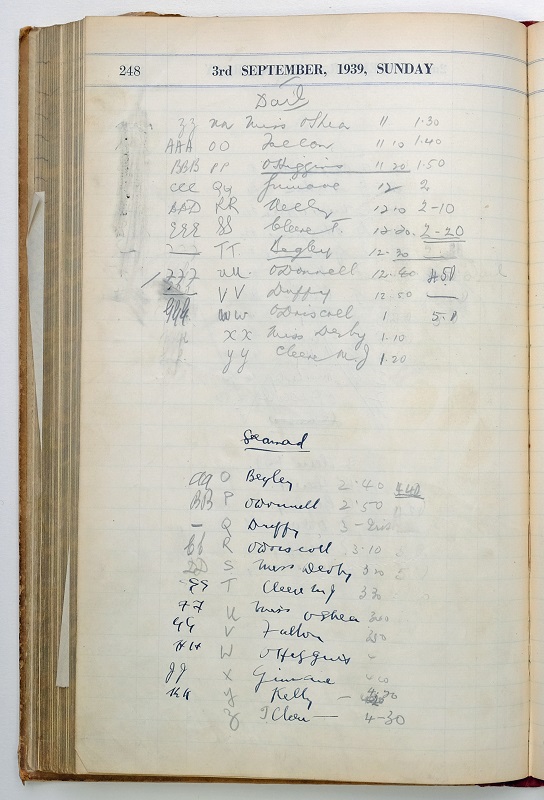 Roster showing that, following the outbreak of WW2 in 1939, staff worked through the night of Saturday, 2 September. Reporter Linda Derby recalled staff worked until 6 a.m. on Sun 3 September, after which they all “went to Sunday mass in Clarendon St.”

How was the Official Report put together?

The reports of the debates of the Dáil and Seanad were produced by a team of reporters, who operated from one big room under the Dáil Chamber, and a group of typists who were based in an adjoining room. On a sitting day, a roster that let reporters know what they were to do was drawn up and written into a big diary, called a scribbling book, which was kept in the reporters’ room. When the Dáil alone was sitting, there were 12 reporters on the roster but the number was reduced to eight or even six when both Houses were sitting because four or six reporters were assigned to the Seanad.

A reporter would sit at a desk in the centre of the Chamber for the allotted time and would “take” a note of everything that was said in shorthand in a jotter. The reporter then would leave the Chamber, go into the typists’ room and, together with all the other reporters doing the same thing, would dictate the take to the first typist available, who would produce an original and two carbon copies. The reporter then went back to the reporters’ room to write any corrections needed onto the typescript. After this was done, a carbon copy, “the blacks”, was put into a tray so Members and journalists could read it. Depending on how many reporters were on the roster, a reporter had as little as one hour in which to complete a take, after which he or she repeated the process with the next take assigned and the one after that until the House adjourned.

The original typescript of a completed take was placed in another tray for the editors to read. An editor would then check it and, if necessary, write further corrections onto the typescript - in red ink. Finally, completed and edited takes were bundled together and taken at set times during the sitting day by a messenger to Cahill’s, the printing company used by the Oireachtas, which published a Daily Book of proceedings shortly afterwards. 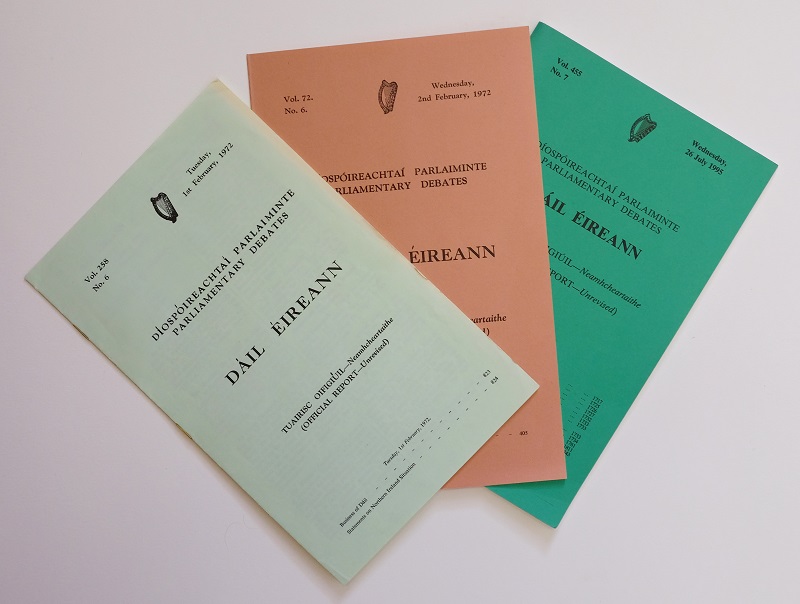 Daily books from the Dáil and Seanad

Written answers - cutting and pasting, but with scissors and glue

On sitting days, the team also had to include written answers to parliamentary questions in the Official Report, which in the era of paper documents was a laborious and messy job. It used to be given to trainee reporters, when available, or to the reporter who reported the last oral answer given in the Dáil Chamber, which was usually at approximately 3.30 p.m. Reporters would cut out and edit the questions from the Order Paper of the day and glue them onto a sheet, under appropriate headings. Then, as the answers - on paper - arrived in the General Office of the Houses of the Oireachtas from the Departments, reporters would take copies, write any stylistic corrections on them and glue them below the questions. When all the answers were in place, the glued-together sheets were given to the editor, who made any further corrections needed in red ink before the whole lot was sent off to Cahill’s, along with the rest of the day’s debate to be published in the Daily Book. 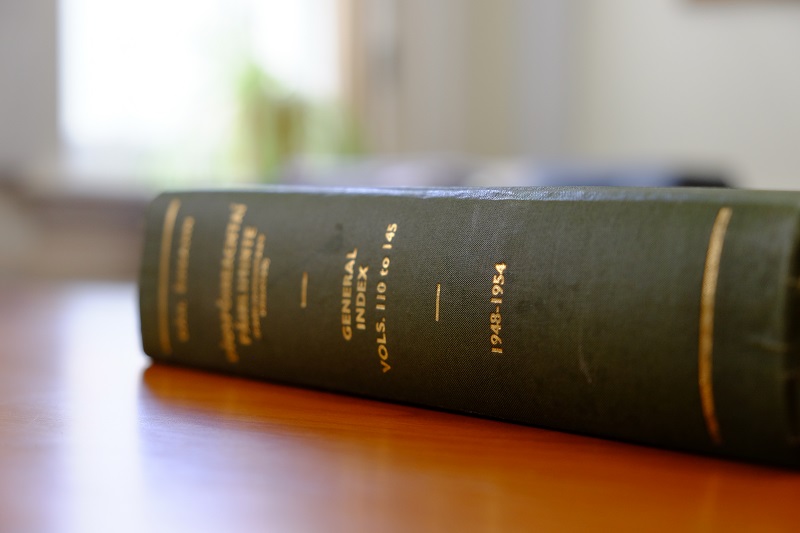 How were fact-checking and indexing done?

Fact-checking was done very differently in the absence of the Internet. The Debates Office kept some large dictionaries and reference books and reporters built up their own scrapbooks of facts and information on parliamentary procedure or specialist terminology like medical references or Latin phrases. People depended heavily on the Oireachtas Library for references, checked details with Members frequently and often used the solitary telephone in the reporters’ room to clarify issues with Departments.

While the index of the Official Report was acknowledged as a crucial resource, producing it without computers was a highly laborious task. Until the mid-1990s, indexes were produced by a dedicated team who generally used a card-based system to carry out their specialist work. This work involved very detailed page-by-page cross-referencing and the identification of Members’ contributions, interventions, rulings of the Chair, subjects discussed and the progression of legislation. 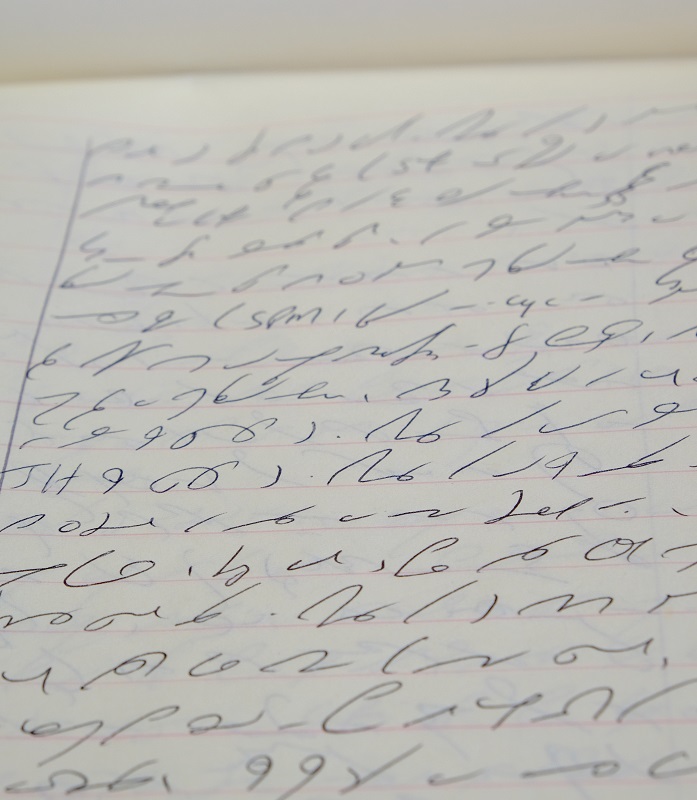 Why did the Debates Office change how it did things?

The biggest obstacle the Debates Office faced was its constant difficulty in recruiting and retaining parliamentary reporters skilled in shorthand. The reasons included the sometimes long and unsociable hours, lower pay than could be earned elsewhere by people with shorthand and the malign impact of the marriage bar that forced married women out of the Civil Service. Temporary expedients were tried, like hiring “girls with good shorthand” to be auxiliary reporters but the difficulties persisted and by the mid-1960s, protests by reporters about their working conditions began to affect the production of the Official Report. Ultimately, these shortages forced changes to the way in which the Debates Office produced the Official Report, which were introduced slowly from the mid-1960s onwards. 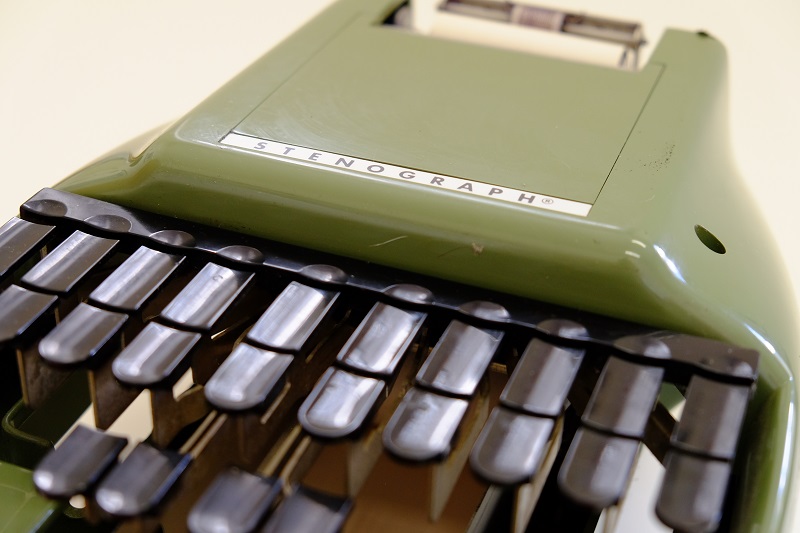 The first major change took place in the mid-1960s when proceedings of the Seanad were recorded on tape because there were not enough reporters to cover the proceedings in shorthand. Thereafter, reporters - especially trainee reporters - were responsible for switching Members’ microphones in the Chamber and for preparing logs of the debates. The first drafts of the Seanad debates, however, were typed by audio typists before being edited and corrected by reporters. Thereafter, the use of recording devices in the office increased steadily, and there are anecdotes from the early 1970s of a reporter rigging a tape recorder to the Dáil’s internal loudspeaker system using paper clips. In any event, from the 1970s onwards Dáil proceedings were being taped as a backup as a matter of course - although reporters still took shorthand notes of the debates. They also used their own tape recorders to help them to produce reports of Dáil debates.

The end of shorthand

The shortage of suitable recruits with good shorthand worsened during the 1980s despite a lowering of the speed required from 140 words to 120 per minute. In 1992, this finally led to a radical change in the way reporters were recruited and how they worked. At that stage, it was decided to recruit transcribers who were not required to have shorthand skills but who would take a log of proceedings in the Chamber before returning to their desks to transcribe their own takes by listening to a recording of the debate. The reporters now had two hours allotted in which to complete a ten-minute take. This method of transcribing, which is still used today, brought the era of shorthand in parliamentary reporting to an end.

People of the Debates Office

Since 1922, the Official Report produced by the Debates Office has been the work of parliamentary reporters, editors, administrative staff and, in earlier times, audio typists who took dictation from the reporters.